GIVE US A CALL AT:

Getting to know your Vitamins 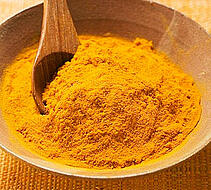 While herbs and spices add zing to our food and make eating infinitely more enjoyable, these often overlooked and taken for granted plants, shrubs and roots typically possess vast therapeutic and health-supportive and protective properties. A teacher and writer of ayurvedic medicine, the ancient traditional healing system of India, once told me that if he had to pick only one compound to use exclusively in his practice, it would be curcumin, the extract from the golden spice turmeric.

Curcumin is the principal polyphenol of a small group of compounds called the curcuminoids, and while turmeric has been used historically as a component of ayurveda, research has identified curcumin as the agent responsible for most of the biological activity of turmeric. What makes curcumin a truly remarkable substance is the vast array of therapeutic actions it possesses.

Curcumin’s most well known properties are its anti-inflammatory and cancer-protective but recently, research has discovered that it has a direct effect on the immune system. In mice engineered to model multiple sclerosis, curcumin regulated the production of CD4+ T helper cells, suggesting an effect on Th-1/Th-2 immune balance which may have implications regarding autoimmune conditions.

Curcumin has a particular ability to positively influence genetic material. The vitamin D receptor (VDR) is a gene transcription factor, that when activated, is involved primarily in calcium metabolism.  The receptor, however, regulates a variety of other metabolic pathways, such as those involved in the immune response and cancer. A recent study has shown that curcumin may facilitate chemoprevention by directly binding to and activating the VDR.  Additionally, curcumin dramatically increases the expression of the CAMP gene, which is a member of an antimicrobial peptide family.

Another characteristic not normally associated with curcumin is its ability to act as an anti-adipogenic agent. A recent study showed that curcumin inhibited adipocyte differentiation by positively influencing various gene transcription factors and cell cycle regulating proteins. In other words, curcumin could conceivably be a weapon in the fight against obesity.

As inflammation is all too often a provocative factor in the development of many diseases and disease processes, it would stand to reason that curcumin, with its well established anti-inflammatory qualities, would enable it to play a significant role in disease mitigation. In laboratory models of diabetes, curcumin was shown to modulate inflammation thus improving insulin resistance by the indirect inhibition of the cytokine activating protein KF-kβ.

As I mentioned previously, curcumin has a very rich and compelling research history as a potential therapeutic agent for various cancers. At the very least, compounds like curcumin have shown to be effective in increasing the potency while decreasing the side effects of a variety of cancer chemotherapies.  But the therapeutic future of curcumin continues to unfold as a standalone anti-cancer agent which again has shown promise in a variety of cancers including aggressive forms of brain cancer.

Find us on the map